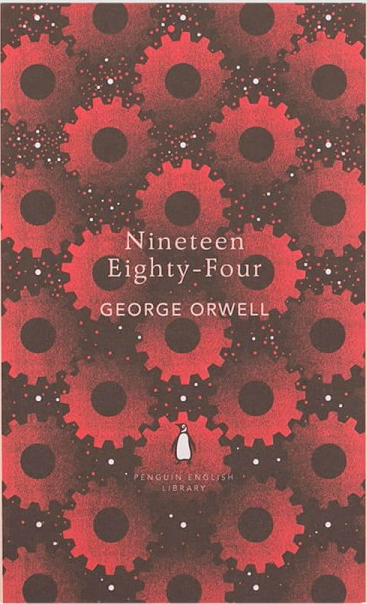 Bookstores are always a joy. But when you live overseas, the English bookstore holds a special place in your heart. My copy of 1984 was gifted by a special person who purchased the book from this special place - the Libreria Internazionale Luxemburg bookstore in Turin, Italy.


Orwell’s flawed masterpiece remains a haunting allegory of our times.

Nineteen Eighty-Four is deeply entrenched in contemporary Western culture. Even without reading the book, people are familiar with its themes and specific terminology like “thought police”, “newspeak”, and “doublethink.” Consider this excerpt, which is both full of sci-fi jargon and still comprehensible to most people:page 53

Don’t you see that the whole aim of Newspeak is to narrow the range of thought? In the end we shall make thoughtcrime literally impossible, because there will be no words in which to express it. Every concept that can ever be needed will be expressed by exactly one word, with its meaning rigidly defined and all its subsidiary meanings rubbed out and forgotten.

Orwell’s picture of the future resonates so broadly because it so fully captures the present. Both Nineteen Eighty-Four and his other widely read classic Animal Farm embodies the author’s genius - his ability to depict the concerns of the present moment in an alternate reality. In the case of Nineteen Eighty-Four, the conditions of the story’s reality are so clearly articulated that its language became a part of our own.

But the book is a rather conventional epic. The forbidden love subplot feels like a requisite aspect of the genre (epics) rather than an essential exploration of the themes or the psyche of the main character, Winston. Perhaps this is why Orwell intentionally undermines his unconvincing love story. The love story is really a device by of the party; Winston’s love is an explicitly political act. The act of dissent is captured when Winston fantasies about spreading sexually transmitted diseases throughout the Party:page 127

If he [Winston] could have infected the whole lot of them with leprosy or syphilis, how gladly he would have done so! Anything to rot, to weaken, to undermine! He pulled her down so that they were kneeling face to face. “Listen. The more men you’ve had, the more I love you. Do you understand that?”

In case you were in doubt that this book is purely political in nature, Orwell drops a full manifesto two-thirds of the way though: The Theory and Practice of Oligarchical Collectivism by the fictional author Emmanuel Goldstein.

Therein lies my only real criticism of this book. I prefer more subtlety in my art and more substance in my story. Nineteen Eighty-Four earned its place in our collective consciousness through the power of its rationality and presentation of its ideas, not the poetic substance that drives our lived experience. Thus this book is a seminal manifesto first and a work of great literature second.

“The essence of oligarchical rule is not father-to-son inheritance, but the persistence of a certain world-view and a certain way of life, imposed by the dead upon the living.” †