When the personal computer went from being a “bicycle for the mind” to a surveilled shopping mall.

Early personal computing was filled with grand proclamations about the benefits of the technology. The PC was touted as an empowering “bicycle for the mind” 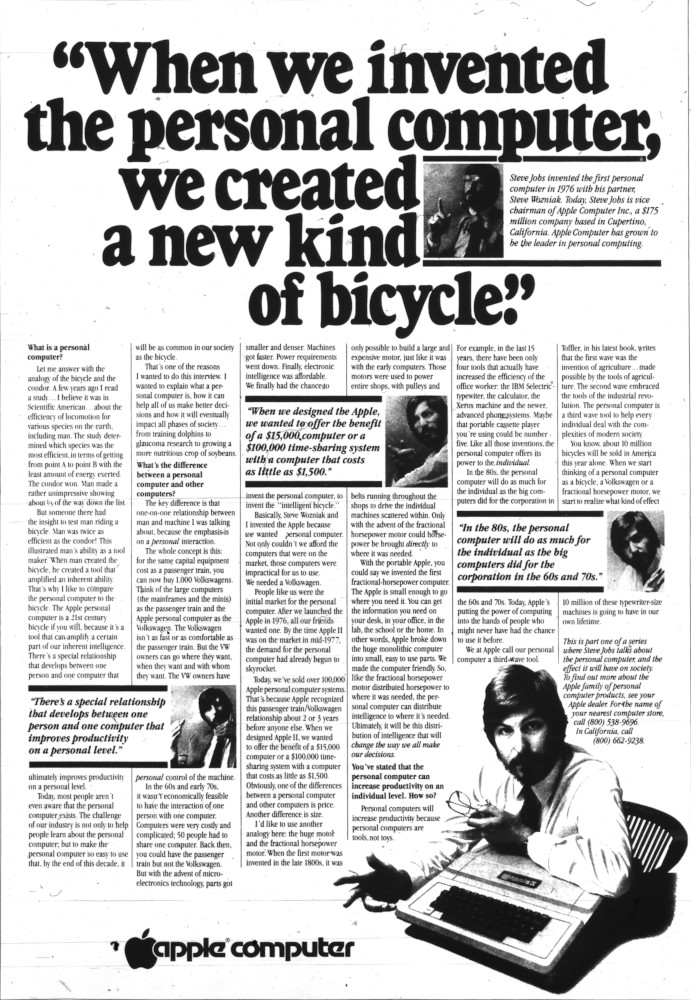 “When We Invented the Personal Computer, We Created a New Kind of Bicycle.” As part of his sales pitch, Steve Jobs would cite an article that showed how the bicycle made humans one of the fastest creatures on earth - what the bicycle does for the body, the computer does for the mind. Wall Street Journal, 1980.

and networked machines were set to connect people near and far. Forty years later, PCs and other small computers are connected and ubiquitous, but the benefits are unclear.

The first mass market computers came from folks who understood marketing and consumer behaviors. These people imbued the machines with the mass market principles that define the industry today. It is no coincidence that many of today’s preeminent technology companies are really advertising companies (such as Meta and Google) or shopping malls (such as Amazon).

Our contemporary personal computers, tablets, and smart phones are more accurately described as “consumer computers.” Some machines may be used as a bicycle for the mind, but they were primarily designed from the beginning as products of consumption.

I won’t speculate on the entanglement between culture and consumption. But I will suggest that it is unwise to confuse the power to consume with personal empowerment. The rest of this post will explore why this confusion exists and continues to persist. With a little clarity, tomorrow’s computers might be better suited to build a healthier digital society.

The mythology of California’s personal computer culture was formed by a mix of existing counterculture and an emerging hacker culture.

In Hackers: Heroes of the Computer Revolution, author Steve Levy offers a historical account which depicts the titular heroes opposite of mainframe “clergy” that mitigate computer access. Young hackers at Massachusetts Institute of Technology were building the first text editors, operating systems, and video games, but the bureaucrats who determined how resources were allocated on campus did not see the value of these experiments.

The mainframe, by virtue of its price and size, was only available to a certain class of institutions. But a smaller machine could conceivably place similar information processing power into the hands of the individual. The Valley’s information-as-power rhetoric adopted from the “hacker ethos” still pervades the story of personal computing. From Campbell-Kelly’s authoritative Computer: A History of the Information Machine:Campbell-Kelly, Martin, William Aspray, Nathan Ensmenger, Jeffrey R. Yost, and William Aspray. 2014. Computer: A History of the Information Machine. Third edition. The Sloan Technology Series. Boulder, CO: Westview Press. Location 606.

There was unquestionably a widely held desire to bring computing to ordinary people. Computer liberation was particularly strong in California, and this perhaps explains why the personal computer was developed in California rather than, say, around Route 128 [outside of Boston].

California was undoubtedly a major contributor to the development of the personal computer. But when it came to actually bringing the computer to ordinary people, manufacturers were often headquartered elsewhere. Radio Shack (based in Texas), Commodore (Ontario/Pennsylvania), and IBM (New York) all made best-selling models in the consumer computer’s first decade.The Apple Macintosh and the Apple II are the obvious exceptions. But Apple’s peculiar influence could not be measured in machines sold. The Macintosh never achieved a significant share of the home or office market. The Apple II had a more significant share, but spent its entire existence trailing Radio Shack, Commodore, or IBM in units shipped.

After which, the most popular IBM clones came from all over the world.

Most 1970s startups in Silicon Valley were not in a position to deliver a computer to the mass market. Nor were the established mainframe and minicomputer manufacturers like Sperry Rand, Burroughs, and Digital Equipment Corporation (DEC). Outside of IBM, all the established computer hardware companies would shrink or collapse after the arrival of the personal computer. These large enterprises had the most experienced engineers and the deepest financial resources. But experience selling low volume, high margin mainframes and minicomputers was hardly useful when selling high volume, low margin PCs. 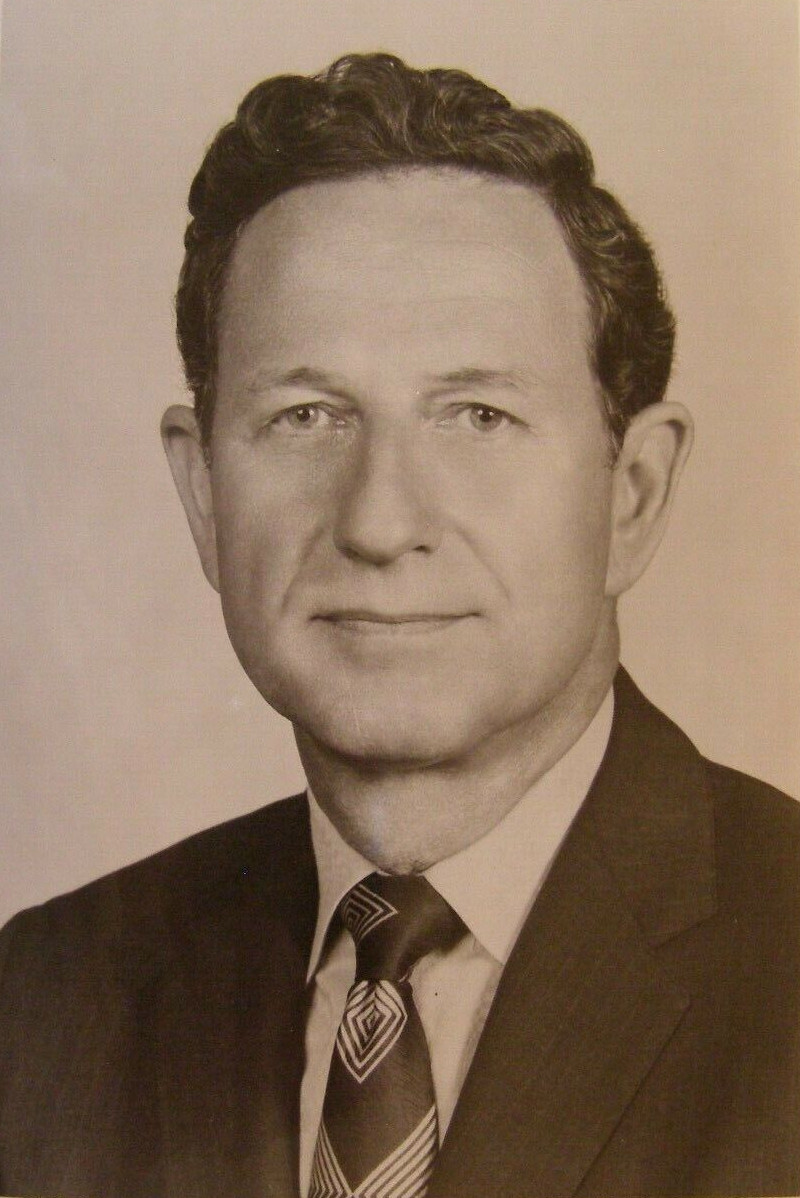 was an adman turned electronics executive at Radio Shack. His time as the company’s president was an era of tremendous growth. This period saw the introduction of two significant consumer hits for Radio Shack: citizens band radio and the TRS-80 personal computer. The TRS-80, announced on August 3, 1977 at New York’s Hotel Warwick,Kornfeld, Lewis. To Catch a Mouse Make a Noise like a Cheese. Englewood Cliffs, N.J: Prentice-Hall, 1983. 269.

cemented Radio Shack as a force in early personal computing.BYTE offers contemporaneous coverage The TRS-80: Radio Shack’s New Entry (Vol 2 No 11, Nov. 1977, pg 446): “Announced in August, the new Radio Shack TRS-80 is a major entry into the personal computer market. The $599 single board Z-80 based unit comes complete with a full ASCII character set keyboard, cassette recorder and video display monitor. Also included for the price is 4 K bytes of programmable memory and 4 K bytes of read only memory; the latter features a built-in BASIC package.”

Within three years the computer boasted more video game titles than any other machine on the planet, including those from Atari, Apple, and Commodore. This achievement also includes all mainframes and minicomputers - a remarkable achievement considering the hundreds of games that creative engineers wrote for these machines from 1951 to 1980.I note this for two reasons. 1. Apple’s own Preliminary Offering Memorandum notes that video games were “the first truly large market” for early computers and this is a market that Radio Shack dominated. 2. Large computers were the only platform for video games until the introduction of arcade cabinets and home consoles. Mobygames has cataloged a wide variety of titles for both mainframes and minicomputers starting in 1951.


Kornfeld asserts his claim to TRS-80 fatherhood in at least three different places in his book To Catch a Mouse Make a Noise Like a Cheese.The three instances: 1. “[Radio Shack’s] TRS-80 personal computer (for which I get fathership credit because when the buck stopped on my desk in 1976 I said”BUILD“)” 2. “And it was your claimant correspondent who authorized the design and manufacture of the TRS-80 Model I, and selected its nomenclature, general appearance and first system selling price, even if reconstructed history evokes different claims for different names as time goes by (as created by newer pressures on business journalism).” 3. “Having named, defined and marketed the world’s first mass-produced personal computer, the TRS-80 Model I, it was enough, I thought erroneously, to settle for pointing the way and blessing the voyage.” ~ Kornfeld, Lewis. To Catch a Mouse Make a Noise like a Cheese. Englewood Cliffs, N.J: Prentice-Hall, 1983. 61, 262, 330.

Being first on retail shelves across the United States put Radio Shack in pole position ahead of Jack Tramiel, Chuck Peddle, and the folks at Commodore,Commodore’s computer actually appeared a month before the TRS-80 in BYTE. From Commodore’s New PET Computer (Vol 2 No 10, Oct. 1977, p.50): “The price of the PET is $595 complete with 4 K bytes of programmable memory. The $795 version features 8 K bytes of programmable memory. All IO connections (excluding the built-in tape drive, keyboard and video display) are made via an IEEE- 488 bus. The PET is an excellent example of the true appliance computer: a neat, self-contained graphics oriented package designed for the mass market as well as for the serious experimenter.”

It must be remembered that no one knew exactly what an average consumer would do with a personal computer in 1977. Consider the problem from Kornfeld’s perspective: “There were no known customers asking for [a personal computer]” therefore “it was impossible to identify typical buyers.”Apple’s Preliminary Offering Memorandum struggled to identify any uses to entice investment and pick up their 3rd-rate sales. You might buy an Apple II to make “better financial decisions,” enjoy “increased leisure time,” and have “complete security of personal information” with “increased personal comfort.” 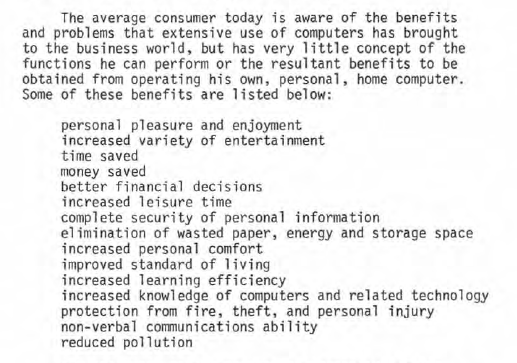 It’s difficult to imagine now, but taking up valuable retail shelf space was a big risk.

Kornfeld rolled the dice in spite of the unknowns, “We had no opening order quantity set beyond what would be needed to buy parts economically, but not less than 1000 were being considered […] and since all we had was a very rough idea of parts and labor costs, a selling price had yet to be firmed up”Kornfeld, Lewis. To Catch a Mouse Make a Noise like a Cheese. Englewood Cliffs, N.J: Prentice-Hall, 1983. 268.


Wherever Kornfeld’s place is in computer history, the benefit of having an adman steering the ship is pretty clear. Radio Shack sold a lot more computers than their contemporaries in the early days. The TRS-80 quickly became the best-selling personal computer and Radio Shack enjoyed a prime spot in computer sales throughout the 1980s.

Radio Shack’s computer was the best-seller in the marketplace until the arrival of Commodore’s Vic-20. Commodore was run by the tenacious Jack Tramiel, who had decades of experience manufacturing and marketing consumer-grade office equipment. Commodore’s personal computers would even outsell IBM’s machines through the early part of the 1980s.

Tramiel and Kornfeld both had the exact consumer products experience that the mythologized California pioneers lacked. Consumer products don’t need to be a bicycle for the mind. They don’t even need to be useful. This is the power of marketing.

But the consumer computer is capable of doing more than other consumer products; it can be a platform for launching entirely new marketplaces. This helps explain why the entire computing sector has been flooded with private investment for decades. Venture capital investment in Web3 is just the latest manifestation of this phenomenon, with the NFT craze being the most recent exemplar.

Conventional wisdom posits technology as a neutral force that can be wielded for “evil” or for “good.” But as Langdon Winner has pointed out, technologies can fundamentally embody explicit political arrangements.“Technologies can be used in ways that enhance the power, authority, and privilege of some over others. […] But we usually do not stop to inquire whether a given device might have been designed and built in such a way that it produces a set of consequences logically and temporally prior to any of its professed uses.” Do Artifacts Have Politics? by Langdon Winner (1980)

Mainframes were a natural enemy of 1960s and 1970s hackers because they were an implicitly centrifugal, hierarchical force. Not due to a nefarious design. Not due to ill intent. But by the very nature of the technology. Mainframes were large, expensive machines that took a group of highly-trained individuals to operate.

Personal computing evangelists and marketers created a narrative that positioned the small computer in opposition to large computing systems. “Computers before personal computers in a sense took away power, but now that you can get your own computer, you get power from it,” opined the influential technologist Stewart Brand.“Today”, TV program (NBC, December 18, 1984). Brand fails to consider the manufacturer’s intent as well as the training of the computer operator. Almost all mid-century computer operators were trained. In today’s world of ubiquitous computing, almost no computer operators are trained. And computer literacy, like media literacy, is almost never taught in schools. A real computer revolution cannot come from an illiterate public.


But our everyday reality using the computer does not feel empowering. You want to use the internet without being tracked? Almost impossible. Want to message a friend? I hope you have read and agree to the WhatsApp Terms of Service and Privacy Policy. Want to install some software on your Apple device? It better be in the App Store. Perhaps you want to lend an Amazon eBook to your sister? Well you don’t actually own it, so you’ll have to ask Amazon.

What happened? I thought computers were supposed to be empowering? In all the techno-euphoria of the 1980s, Brand and others did not consider the manufacturer’s intent: our everyday computers, tablets, and phones are consumer machines built for consumption. The personal computer was replaced by the consumer computer just as soon as it arrived.