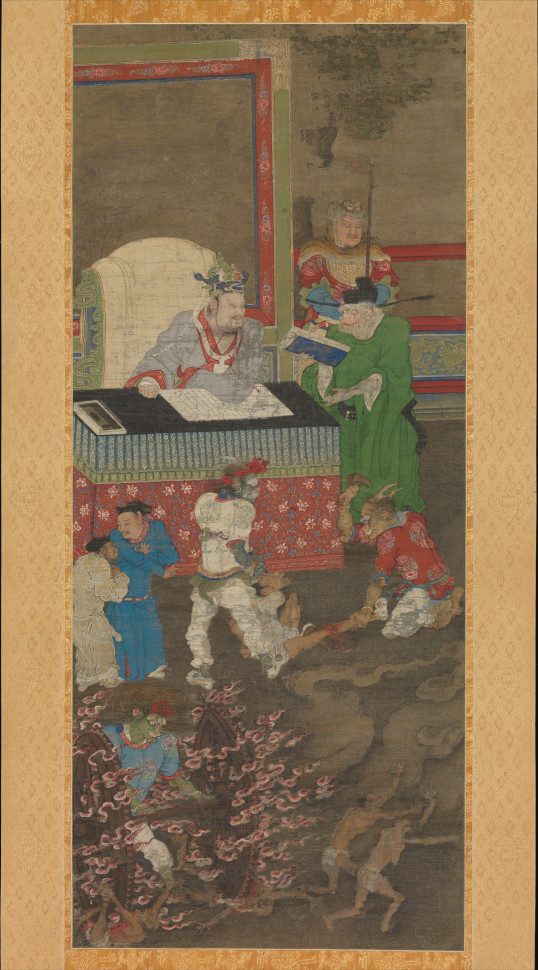 The Metropolitan Museum of Art, Ten Kings Of Hell, image, 1195. “[The series] transforms the Indian Buddhist view of judgment after death into a typically Chinese bureaucratic process.”

In art-making one sees oneself as a river but also as the boat on the river, periodically tossed on to the shore only to be caught up in the river’s momentum once again. When this vision is achieved, creative individuals are able to move with excitement from one project to the next, from one idea to the next, completing one and beginning another, in an endless tide of creation, cessation, and creation again. If you are lucky, you can surround yourself with others tossed about by the same, tumultuous waters. And if you are very lucky, while on your own journey, they will invite you to enter into and comment on theirs.

The other night I was talking to a friend about sharing political opinions on Twitter. As I watch from Italy, the United States is suffering a crisis of conscience as it attempts to navigate a pandemic. Looming in the background is a presidential election in November where disinformation is being spread about the basic mechanisms of democracy - most recently regarding the legitimacy of mail-in ballots - from the very head of the government itself.

I still believe that the best internet is the internet that engenders community and conversation. A network of thought is like a community of artists. Each person who shares their small creative act invites a response. An observed reaction cannot be unseen. The river only flows one way.

The bureaucrat is a slave to the machine. They move information along uncritically. No conversation is desired or necessary; the acts are justified by the process itself.

The performative aspects of social media - likes, retweets, and chasing engagement - are different than the conversational tools of message boards and newsgroups. “Engagement,” as it is called in the analytics dashboard, is cosmetic. It obscures the difference between conflict and conversation.

So my line is simple - I share political opinions online when I feel like I have something to contribute to a conversation. And that’s not very often. 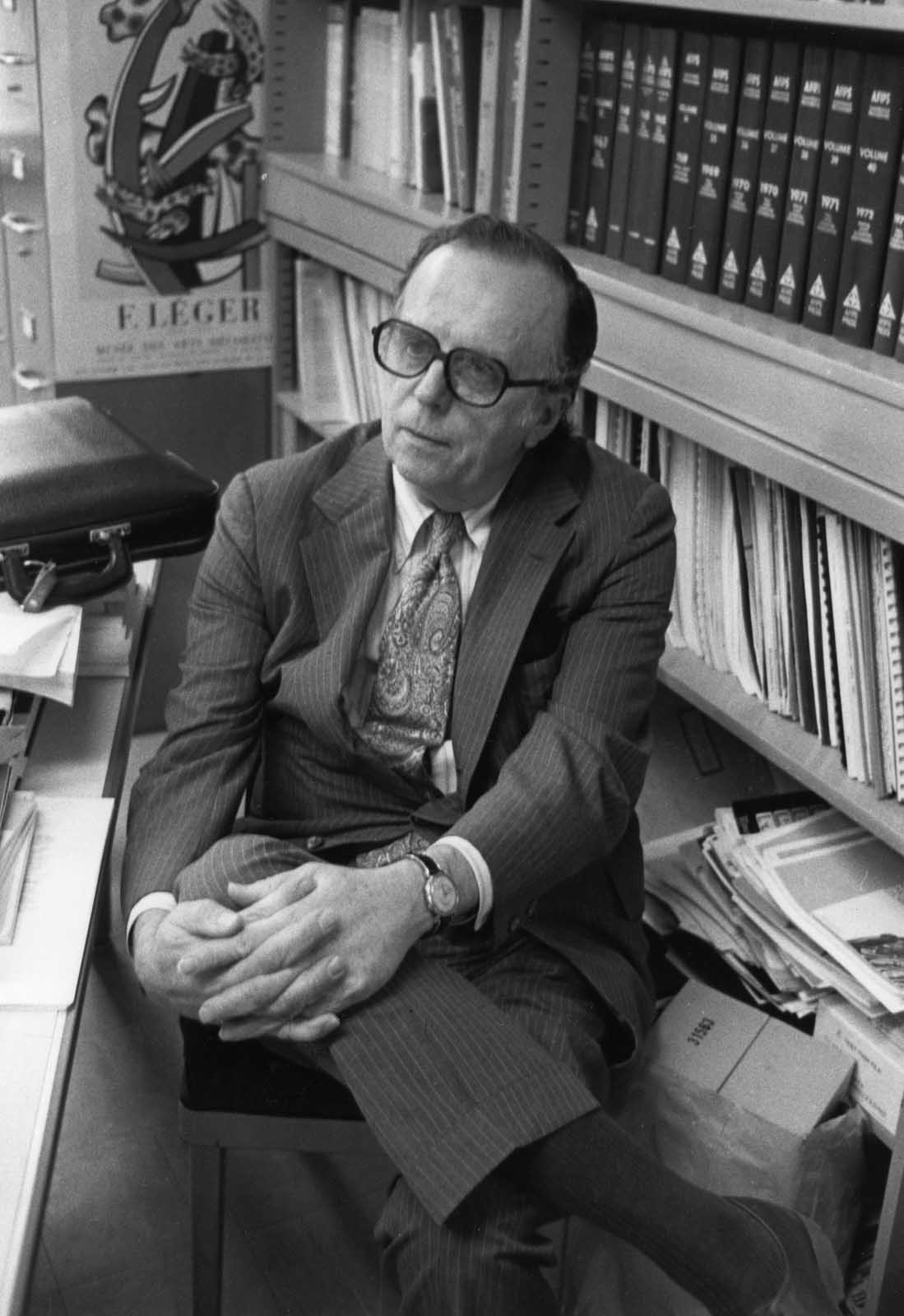 J.C.R. Licklider (1915-1990). Photographer Ben Shneiderman remembers, “I enjoyed his visit to our group at the University of Maryland in April 1979, when I took this photo, and soon after appreciated his kindness as my host to speak at MIT.” (Ben Shneiderman, J.C.R. Licklider, image, 1979.)


Why isn’t the internet better at engendering conversations? The precedent was set early on. Consider what networking pioneer J.C.R Licklider published in 1968 on online communities:J.C.R. Licklider and Robert W. Taylor, “The Computer As A Communication Device”, Science And Technology, April 1968.

In most fields they will consist of geographically separated members, sometimes grouped in small clusters and sometimes working individually. They will be communities not of common location, but of common interest.

Licklider argued that people would be happier and more productive if they participated in communities of shared interest rather than “accidents of proximity.”Licklider’s vision for a “network of networks” was profound its scope and relatively unique in its time. Beyond communities of interest, he shares three other outcomes of a networked society: “Second, communication will be more effective and productive, and therefore more enjoyable. Third, much communication and interaction will be with programs and programmed models […]. And, fourth, there will be plenty of opportunity for everyone to find his calling, for the whole world of information, with all its fields and disciplines, will be open to him.” (J.C.R. Licklider and Robert W. Taylor, “The Computer As A Communication Device”, Science And Technology, April 1968.)

At least in my case, his vision has come to pass. I communicate with programmers, artists, and researchers around the world from my home in Turin, Italy.

The Artist is the Bureaucrat

At his best, Licklider was an imaginative manager who empowered creative individuals across computing. His work had a tremendous impact on the internet, graphical user interfaces, and computer science education.In the video below, Licklider warns that the internet will place us on “a new technological base for intellectual efforts before our ponderous social processes will let us. I think more people outta get in there and think about the social process.” Another well-formulated forecast.


At his worst, Licklider was a technocrat. He effectively navigated the military bureaucracies of the Cold War by promising predictive models using complex data to bolster counterinsurgency efforts at home and around the world.See Yasha Levine on Licklider and Ithiel de Sola Pool’s 1969 ARPA Cambridge Project: “Once complete, it would allow any intelligence analyst or military planner connected to the ARPANET to upload dossiers, financial transactions, opinion surveys, welfare rolls, criminal record histories, and any other kind of data and to analyze them in all sorts of sophisticated ways: sifting through reams of information to generate predictive models, mapping out social relationships, and running simulations that could predict human behavior.” (Yasha Levine, Surveillance Valley: The Rise Of The Military-Digital Complex (PublicAffairs, 2018))


This tension is most apparent in Licklider’s writing on community. Building a healthy community that engenders fruitful conversation is a difficult endeavor. It requires a certain skill and a lot of hard work. Most people who manage book clubs or internet forums do their work unpaid. Their effort is yet another form of labor that no technocratic system can seem to properly compensate or value. The very linchpin of community building goes unmentioned in Licklider’s musings on online communities - as if the technology itself was the solution. Sadly, Silicon Valley has done little to correct Licklider’s oversight sixty years later.

“First, life will be happier for the on-line individual because the people with whom one interacts most strongly will be selected more by commonality of interests and goals than by accidents of proximity. Second, communication will be more effective and productive, and therefore more enjoyable. Third, much communication and interaction will be with programs and programmed models [...]. And, fourth, there will be plenty of opportunity for everyone to find his calling, for the whole world of information, with all its fields and disciplines, will be open to him.” †